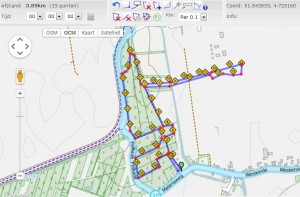 The start and end of the walk is behind the building of the Natuur en Vogelwacht Alblasserwaard (NVWA, also club house CH) at Matenaweg 1 in Papendrecht. The route also partly runs along the Gasunie site. During opening hours, additional information about the planet walk can be obtained in the NVWA building.

This forest walk is about 4 km. long and lead as much as possible on the existing hiking trails of the Alblasserbos. Information about our solar system has been placed in various forms along the paths. This forest is owned by the Forestry Commission. The walk starts at the Sun and goes through Mercury, Venus, Earth, Mars, asteroid belt, Jupiter, Saturn and Uranus to the 8th and outermost planet Neptune. The attentive reader will miss Pluto in this list. However, Pluto is no longer considered a planet, but a mini-planet. That’s because there are many of these dwarf planets orbiting the sun at the edges of our solar system, some of which are even larger than Pluto. http://www.verenigingchristiaanhuygens.nl/planetenwandeling/het-plan/
Planet trail Christiaan Huygens, Papendrecht, NL